Here comes a small bugfix update, special thanks to Ryman! This update fixes one of the rarest, but most disappointing bugs I've ever encountered.

My first indication was that one or two players stated that the game was spectacular, but the end was kind of disappointing. We actually tried to ask further about that, but unfortunately didn't get any meaningful answer about it, so we just assumed that it's not possible to make everyone happy. But finally today I got a feedback from someone who saw the problem - the game was completely freezing for him just before the actual ending and all the cool bits. Fortunately the bug was very rare, but we wanted to fix the problem right away. If you were affected by a peculiarly abrupt ending, all you have to do is update, and load a save from before entering the last area.

If you're interested in Driftmoon, this video review will only take you 72 seconds. Yes I know, it's 12 seconds overtime, but it's very thrilling and will keep you on the edge of your seat for the whole time.

Welcome Steam, our newest retailer! If you've ordered Driftmoon earlier through our own storefront, you should already have your Steam redeem key in your email, so go redeem your copy. And from this moment forward, direct customers through our site will receive a Steam code as well as a regular Driftmoon key the instant of their purchase.

And to address two popular questions, will Driftmoon have Steam achievements, and will it have trading cards? The answer is, yes, and yes. It will have both, as soon as we can release the new version that includes them. We'll let you know when it's ready.

Before you go play that Steam version of Driftmoon, I want to post this quote from a guy who worked on Ultimas 1 through 7, plus the Worlds of Adventure, and consulted for Ultima Underworld, and on top of that, chatted with my wife Anne. Being a huge fan of Ultima 7 (or Ultima VII), I'm just too eager to share it:

"I just finished playing Driftmoon, yesterday, and I have to tell you, Anne, that it is by far THE BEST RPG I've ever played (this coming from someone who used to make RPGs for a living)"

Wasn't that nice? Certainly, even if Driftmoon turns out not to be the best RPG out there, it certainly has the best fans.

Ps2. Go check out the brand new orchestral pieces by Gareth Meek, Driftmoon's wonderful and talented composer: "Zero", "The Horizon is Scarlet", and "Relentless Barrage". And if you don't have the Driftmoon Soundtrack yet, I'm sure Gareth would be thrilled to get your support.

I wonder which game is the best selling game at gog.com today, ahem? We're NUMBER 1, yeah!

It's due to the charity promo, of course. 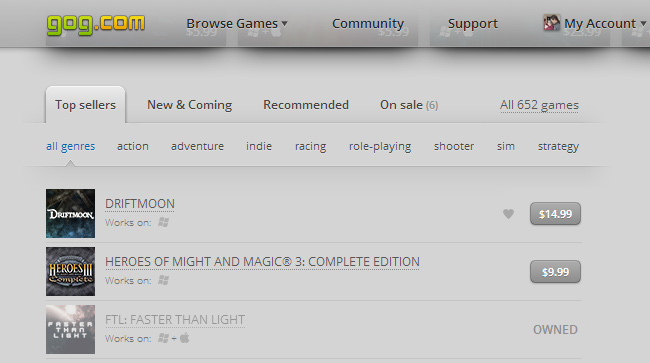 Ps. That image actually shows that I don't own a copy of Driftmoon.