By popular request I'm moving forward on my oldies goldies list to the year 2000, when the budding game developer Ville had acquired his first version of Visual Studio C++. Oh boy, I was really in wonder of that thing. You could do programming magic I never thought possible before, like arrays and floats and struct types. Turns out they were equally possible in both Visual Basic and Pascal I had used previously, but this time I actually read some short tutorial into the language before starting on a new game.

And looking at the code now, it seems I didn't know you could write multiple source files. Then again the whole game has about 8000 lines of code, so it didn't matter that much. This was the first time I tried my hands at 3D programming, and I loved it! I quickly whipped up my own 3D file format, and an exporter for 3DS MAX. Later on I enhanced the same engine for Bikez II, Wazzal and Magebane 2. I'm still using the same sound code for Driftmoon, because after trying several sound libraries I settled for the only working solution I found.

So onto the review! At first I couldn't find the executable because I seemingly didn't know how to put things into subfolders. The game seems to start fine and runs even on my new Windows 7 machine with sounds, so technically it seems solid enough. The user interface feels complicated and unnatural, but nothing worse than any console game I've ever played.

I remembered the fighting mechanics, so I didn't have a problem fighting the enemies. But back in 2000 the sheer amount of people who didn't know how to fight with the mouse was overwhelming. I must have mailed a dozen people a week requesting help. The combat still felt rather random, the best strategy was apparently  to make runs straight to the enemy with your sword pointed and hope it hits. As you win more battles you get more money to buy more gear to fight more battles, until one day you win the last baddie. 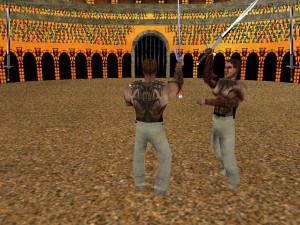 You can download The Forge here. I honestly think you should rather play something like Notrium or the Driftmoon demo instead, but those interested in gaming history are welcome to give it a shot.

After releasing the game I got several offers from startup gaming companies, at the time game companies must have been desperate to staff themselves if a 17 year old kid from Finland would have been a good choise. Another tidbit of history, can anybody guess the original name for The Forge? I changed it before releasing the game because the original title was a common word. As if The Forge isn't!