Whenever I show Driftmoon to people who have never heard of it, the discussion always starts with me explaining why it has a top-down perspective. You know, the fact that you see the game from a bird's eye view. I usually try not to write defensive posts like this, but maybe this will save me some time whenever I demo the game.

Here are a couple of the more common questions:

That's true, the only people who are accustomed to seeing people from a top-down perspective are people who fly hot-air balloons.

2. Then why don't you just turn the camera a bit, make the game more like an isometric game?

Actually, I have done that since the preview version. In recent versions the camera is about as far south as I can make it without things starting to look weird. Turning it south even more would mean we need 3D models for the characters, which I won't do since I want people to be able to mod the game easily.

I've saved the juiciest question for the last:

3. It would improve your visuals if you used a sideways perspective, maybe make the characters silhouettes.

Honestly, I've actually heard this from a guy reviewing games for a living. I think this was before Limbo, but after some of the first silhouette games, so I think he had something going there. Have you seen how many platformer games have that distinct Unique Silhouette Style? I think it's about 50 percent of all new platformers, so I rest my case. 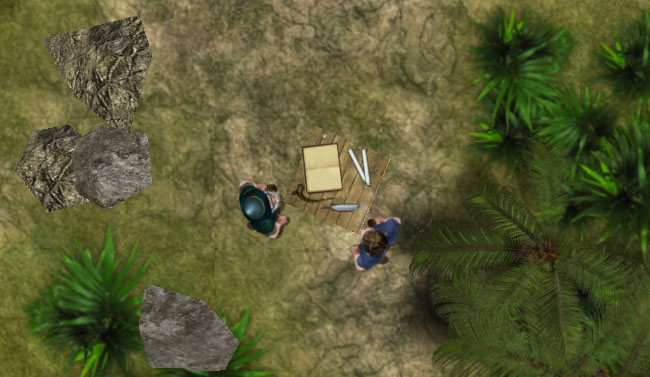 I like top-down. It's very rarely used these days, so it's a bit more unique than any other choice. I like how I can make tiny ants litter the floors, and almost see secret treasures hidden behind walls. As a developer, I love how I could make this Professor Dore in fifteen minutes, and not the ten days it would have taken in a 3D program.

PS. If you've ever gotten disoriented or even lost in a 3D game, as I often do, you'll love the top-down view of Driftmoon.