Scared you with the headline, didn't I?

Dave, my son, do you still remember grandfather Marthon's strange gem? I think I may have finally found out what it is! Please come see me as quickly as you can, I will tell you more when you arrive at Northrop. I can not risk writing more in this letter, and it might be best that you don't speak of this to anyone. I have asked your brother to come as well, I know he'll find this extremely interesting.

Dave is of course the default player name the game uses when I'm testing. The game starts from your home village, where you're about to meet your father after a long time of absence. But as you enter the village, everyone you ever knew there has been turned to stone, and strangely only your father is missing! 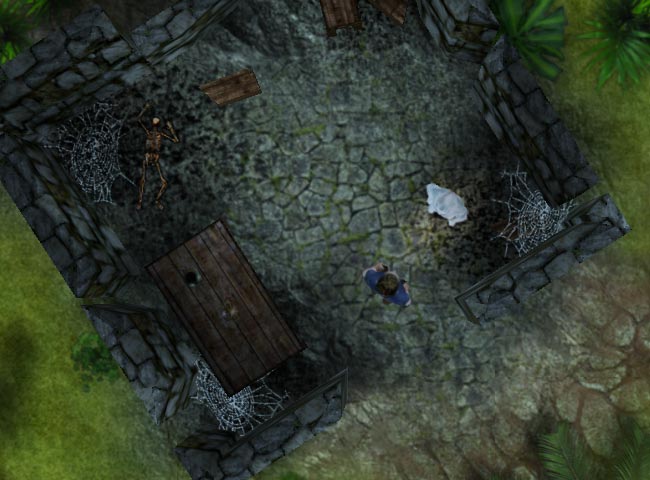 There really is a new level at the beginning of the game, and quite a few big plot changes. We haven't changed everything in the game, just large parts of the plot from the beginning. Think of this as a refinement. Those of you who have played the game will know that it used to start straight from a dungeon, and you were armed with just a letter from your brother telling you to go there and collect the artifact inside. In the more recent version you were out to find your missing brother. In any case you were rushed straight into action.

Originally I designed it this way because I dislike games where you have to read a book of dialogue and intro before getting into the thick of things. In Dragon Age one of the plots start with a long winded discussion where the king and some nobles talk, and you get to say something in between. I couldn't get the hang of the discussion since it dropped me straight into it. I didn't recognize the faces or the names, and I didn't know why I should care about what they have to say. Since I had just started the game I was eager to see how I can control the character and how the combat works - I ended up skipping most of the dialogue. Of course I shouldn't have, since it was all very important later - from then on I had the nagging feeling I had missed something. So that is why I wanted the game to start quickly and without intros.

Obviously doing that I missed a key factor, if there were not enough dialogues or intro telling you why you're adventuring, why would you care about exploring the dungeon? Wouldn't the player like to know for example who he is, or what this world is, or even who precisely it is we're fighting to save... Some would argue that throughout roleplaying history most games have just started with just a few sentences telling you that you need to save the world. But I've grown too old and too demanding. I tried a dozen variations of intro sequences, but in the end I realize that I want to tell so much back story that it'll fill a small book. But a level is better than a thousand words, so here we are!

We've actually pretty much completed the level, but I'm still going to add a couple of new features before releasing it. But more on that a bit later...