It's been a little while since we stopped to look back, and evaluated the current stage of Driftmoon, so I decided to ask myself a few difficult questions.

What is Driftmoon?
It's a roleplaying game that my lovely wife Anne and I are making. It's a game for people who love to explore and find things, and who like to meet interesting characters. See the Driftmoon page. I think that this screenshot tells you something about the nature of the game: 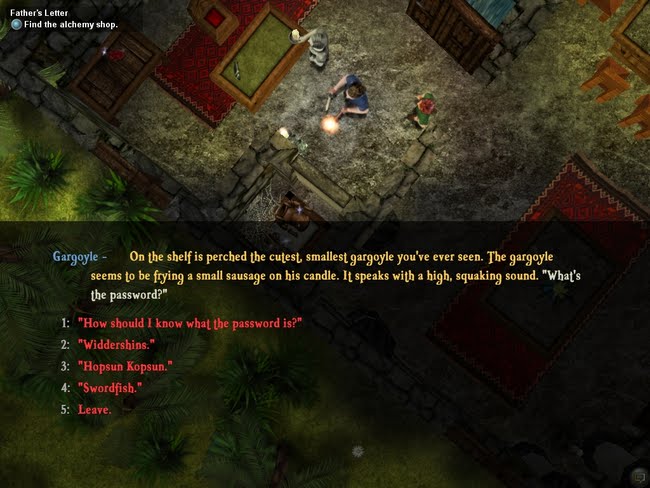 When will it be ready?
I'm terrible at estimates, so I'll just tell you what's left for us to do. We've completed 6 major areas out of 8 (the current Alpha includes 4 of them). We've got a lot of content ready for the last two areas, so I think we're at about 80 percent completion for the game. So there's still a few months left before we can release it.

What are you working on right now?
The new monsters! Although Driftmoon is not an action RPG, we still want our combat to be as fun as possible. So we've been working hard on improving the fighting side of the game, and part of that is adding interesting monster types. We want to make some monsters that require a bit of thinking from the player. Some monsters might be relatively easy on themselves, but together with others they start requiring pretty clever strategies to deal with. And you can sometimes even use the new monsters against each other.

What is the vision behind the game?
The vision is to make a fun game, with our own personal touch! We want to make a game with intriguing characters, where you can explore and find new things. Above all, we wanted a place for us to pour all the stories floating around in our heads.

So there are a lot of optional mini-stories in Driftmoon.

How long is it?
I believe the main adventure in Driftmoon will be about 10-20+ hours of high quality playtime when completed. After that you can continue playing with our mods, which are just one click away. Obviously a lot depends on your playing style, as with all roleplaying games. There are a lot of optional quests, and dialogues including a lot of back story that you can read if you want to. We made the decision early on that each minute of the game should matter, so there's nothing repetitive, and no empty content just for the sake of prolonging gaming-time.

What other games is playing Driftmoon like?
Of course Driftmoon is not a retro game, or a clone of any game, but it's possible to make some comparisons. The combat system in Driftmoon has similarities with Dragon Age. In it's core it's really a turn based system, but it runs in real time, and you can pause it. Talking with other characters is similar to Baldur's Gate or Fallout. And controlling your character works a lot like in Diablo, except you don't need click so many times in combat.

Why is Driftmoon top-down?
It's top-down because I tend to get lost in games with a first person view.

The perspective also makes it very easy and intuitive to control your character. We can also make all of our characters from cleverly placed sprite sheets, so it's very easy to make new characters and monsters in the game. That is a big time-saver for modders, and it's left us a lot more possibility to fine-tune other aspects of the game. If you haven't had the chance to play any top-down games before, the perspective might feel a bit weird at first, especially when looking at the screenshots. But when you actually play Driftmoon, I promise you will get used to the viewpoint in a matter of minutes - that's what I've been told by some of our preorderers.

Here's how peanut for example has put it: “This looks great. I actually quite like the top-down perspective – the graphics style is strong and clear, and I think the perspective will make interacting with mouse much easier. No need to rotate the camera to select obscured objects.”

How does modding in Driftmoon work?
Driftmoon comes with the full tools used to make the game, and they will also be available in the demo version. So basically you can fiddle around with Driftmoon, and make your favorite changes to it. Or, you can implement that great game idea that's been floating around your head, waiting to get out.

When making your mod, you get to use all of the Driftmoon content (including images and sounds) in any way you choose, or create your own. It's a complete roleplaying game building set! What's more, there's an automated mod distribution and installing system built into the game, so you don't have to worry about hosting your mod. And if you choose to ask money for your mod, we can arrange that as well. 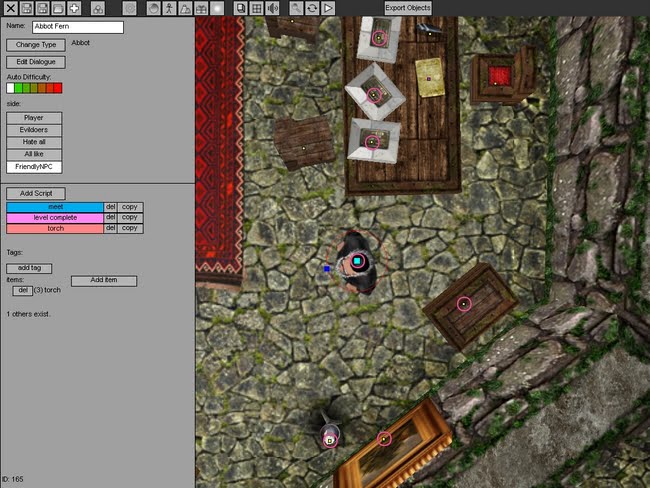 What have people been saying about the game?
There have been no actual reviews yet, but the feedback we've received has been very positive. And Driftmoon has been nominated for the MindTrek Indie Award!

We also want to heartily thank all our preordered, the users of our forum, and the commenters of our blog for hanging with us along the way. Your support, feedback and ideas mean a lot to us!

If you want to support us, you can still preorder Driftmoon on a 20% discount!