Anne's been bugging me very persistently to give you a screenshot of our newest monster. Welcome the Stone Titan! Currently he comes in four different sizes, this being the second largest. 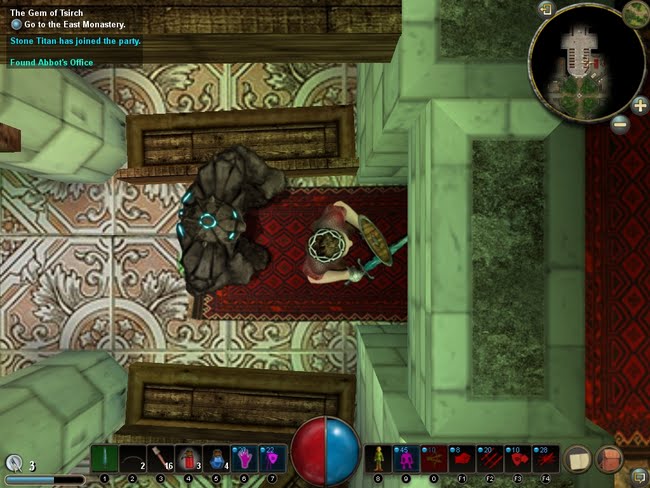 Another piece of news that I'm always reluctant to discuss, but Anne is eager to tell it: We'll have to up the play time estimate for Driftmoon. Personally I dislike play time estimates, because they don't really tell much about a game, and they are often exaggerated to sound like you're getting a lot of game for your money. There's no standard to how game times should be calculated.

Here's how our game time is calculated: I play the game on Warlord difficulty, going straight from quest to quest with my omnipotent memory of the game, reading the dialogue (I'm always on the lookout for spelling errors and plot inconsistencies), and picking up everything that happens on my path. So it's more like a quick walkthrough, with no time allotted for wondering what to do next, and no time looking at maps and journals and thinking about strategy, or retrying difficult battles to get a more optimal ending - things you do the first few times you play a game. When I reach the end of the alpha, the ingame clock tells the wall time of how many minutes it took. Simple as that. A real player might take triple the amount of time I take. Actually I could probably add a button to the end of the game where you could click to send us your play time...

Did you read the above? Good. The upcoming alpha takes me about 6 to 8 hours to complete. The areas after the monastery are not included in that. Roughly speaking they should be about one third of the total game time, but we'll just have to see.

If you're the kind of person who doesn't play anything with less that 30+ hours on the sticker, you can easily spend that in Driftmoon by looking for all the hidden little things like the Silver Feathers, and solving the Easter Eggs - not to mention harvesting ingredients to build your own army of walking Ticker bombs. I know I've spent hundreds of hours actually playing and replaying the game. And don't forget that there will be user made mods, which will add to the game time.

And if you're the kind of person who can only spare a few minutes per day for gaming, Driftmoon is just the right length for you - you can save and load at any time, you can alter the game difficulty level at will, and you have a journal and a map to help you remember what you were doing. But what's more important is that this is a game that's 100% filled with real human made content. So whether you have a half an hour or six uninterrupted hours to spend with the game, you won't spend that time grinding to get to the next level - you'll spend it having grand adventures in Driftmoon!