First of all, thank you for all the feedback! This post is for the game and software developers among you, and for those who are interested in Driftmoon internals. Today's topic is lessons learned from the feedback form in Driftmoon. 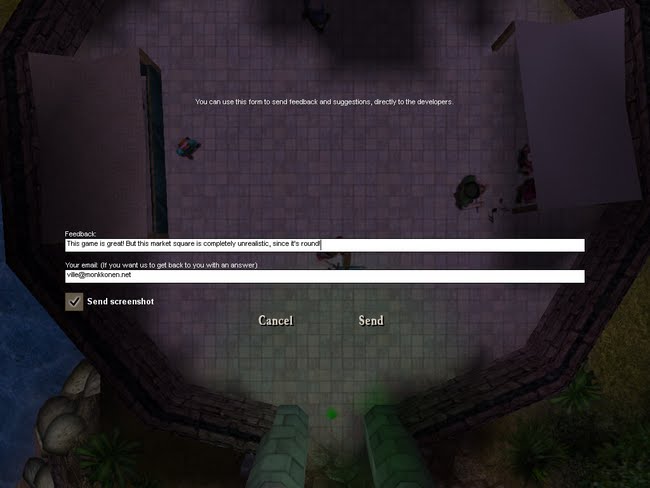 To those of you not familiar with Driftmoon, the current alpha versions have a small feedback button in the lower right corner of each screen. When you click it, the game shows a text field, along with an optional field for the player's email. And best of all, it allows you to attach an automatic screenshot of the screen you were in when you pressed the button!

This tool has been invaluable to us during our beta testing. When people have a button they can press when any big or small problem arises, they can send their feedback without interrupting their game for more than a couple of seconds! This greatly improves the quality and quantity of feedback. Another game I'm working on called Ekapeli has an option to send feedback when you shut down the game, and by that time people have mostly forgotten what they wanted to tell us.

The screenshot feature is a must-have. When somebody writes to us that there's a spelling error in some NPC's conversations, it's a hundred times easier to actually see a screenshot of the actual problem, than it would be to read through all the texts of that particular character. Often the problem is also visual, simply that something looks particularly wonky, and a screenshot would be the only way to communicate that. And other times the problem may not be visual at all, for example it's a sound related bug. But getting a screenshot along with the problem description allows you to roughly know where in the game world the error occurred - something you don't often get with descriptions of sound errors.

Techinally the feedback form is nothing special. It saves a screenshot right at the moment the feedback button is pressed, as a highly compressed jpg. Using high compression saves both the player's bandwidth, as well as ours. The game does a simple HTTP POST to a predefined URL. I've written a java servlet to handle the incoming request - it actually just sends the feedback and the screenshot to my email. If you're using a bug tracker, it might be a good idea to send it there as well.

Since the button takes up valuable screen space, we might want to remove it once we release the game. But we still want to keep the feedback system, possibly activated by a keyboard key. The hard part is to remind the players that such a key exists.

We've found this feedback tool so useful, that we use it in our internal testing. When I'm playtesting the game myself, I continually click the feedback button and send myself feedback. Why would I do that? I could just type the errors in a text document. I do it simply because I also get the screenshot along with the error description. Often it takes a couple of days for me to go from testing the game into fixing the errors, and seeing a screenshot with the text helps me recall what happened at that particular time.

How about you, have you found useful ways of getting great feedback from your users? Or if you've used the feedback form in Driftmoon, how would you improve it?

PS. Check back in a day or two or three.