We'd like to share with you two indie games worth checking out, made by two awesome indie developers that we've recently gotten to know a little.

First, Frayed Knights, an indie RPG of comedy and high fantasy, by Rampant Games. I've already tried the beginning of the game, and it seemed quite intriguing. I know I'd be interested in exploring further, once we get the chance.

I especially liked how vividly the characters of the party conversed with each other, and how they all seemed to have distinct personalities.

We asked Jay to tell us a few things about Frayed Knights, and here's what he wrote:

"Frayed Knights: The Skull of S'makh-Daon is something of an homage (and maybe a little bit parody) of not only older western CRPGs (Wizardry, Bard's Tale, Might & Magic, Ultima, etc.), but also dice-and-paper role-playing from the 1970s and early 1980s. But I didn't want to just copy the style of these old games - I wanted to do something new with the old ideas, and bring in some of the flavor and situations of the old games that had been long abandoned (or ignored) for new players. And I wanted to have fun with it, and make the game a little humorous.

Part of the humor idea came from wanting to bring back the first-person, party-based dungeon crawler: One of the problems with these old games is that it was easy to stop thinking of the characters in your party as individuals. To solve this, I decided to make them fixed characters who were constantly chatting about the game. Sometimes they were directly interacting with other characters in the game, and sometimes they were simply offering commentary, sort of like Mystery Science Theater 3000 (if you ever watched that show)." 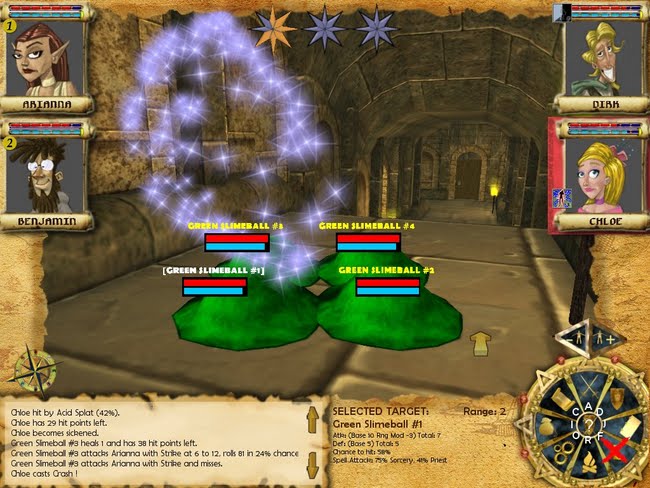 "Another new feature is the use of "Drama Stars" - the three stars at the top of the screen. This was my effort to solve the problem of "save scumming," or when the player is constantly saving and reloading to get the best result from random events. This can make the game hard to balance: It can be too easy and boring for the people who save & reload all the time, and too difficult for the people who try to play the game "straight." The Drama Stars help this by giving players who do not reload access to the similar kinds of advantages someone who constantly reloads might enjoy - like guaranteeing a successful roll, or restoring a character (or even the entire party) from being knocked unconscious. The Drama Stars put this power more directly in the control of the player."

Sounds interesting, doesn't it? Go ahead, give Frayed Knights a shot (Just noticed it's actually 50% off up until the start of next week)!

It's always best for the developer if you buy directly from them (via the link above), but if you prefer, you can also get Frayed Knights through Desura.

Here's also a link to Steam Greenlight. I'm pretty sure your vote would be much appreciated.

And onto the second part of our indie game check-up: Private Infiltrator by Espionage Noir is steadily approaching release, and is described as an arcade-like Stealth game that bears the Noir art style. 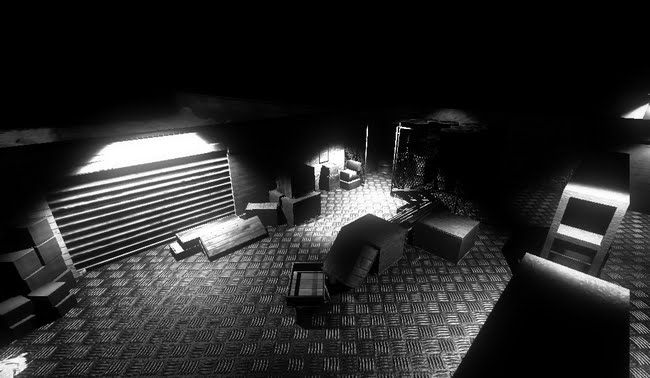 Here's a clip from the Steam Greenlight description of the game:

"The game's core mechanics are fairly simple and easy to pick up, yet difficult to master while also retaining a satisfying amount of depth. They revolve around the double-sided nature of light in stealth games enriched by the Noir art style's principles, hacking and bypassing electronic devices, as well as elegant evasion of detection.

At the player's disposal are numerous gadgets such as sound-emitting decoys and poisoned coffee, as well as special abilities such as Blinking and Invisibility. Building on the core gameplay are extra mechanics such as a point reward system accompanied an in-game black market with a dynamic economy system from where the player can either purchase useful equipment, or exploit the fluctuating prices in order to gain profit by selling loot they can steal from the base.

The game also features a wide variety of unlockables such as new characters with their own special abilities, entirely new pieces of soundtrack and bonus maps. The game's difficulty level could be described as both diverse and brutal, offering awareness and resource management challenges amongst the classic stealth gameplay. There is also a relatively strong story element to the game, although in order to fully experience and understand the game's plot the player must rely on written text scattered, and some times hidden, throughout the base. Completing side-objectives also has an effect in the later stages of the game."