I've been working on some of the new ideas I have for the start of the game, and some of them involve a bit of scripting. Usually it's a good idea to separate your script to different modules, name them, and have one main script call them. To that end, I added two new script activation options: Start and Never. "Start" activates the script immediately at the beginning of the level. I'm using it for torches. "Never" means the script can only be activated by other scripts, useful for making modular scripts that shouldn't be activated by the timer or the player.

But lazy as I am, I ended up working on one longer script. It didn't all fit into the screen, so I made all of the script actions and conditions take less space vertically. Soon I realized I wanted to know where the script target was changing, so I would know when further actions weren't affecting the target I had. So I added color coding. After that I wanted to add an action to the beginning of the list. But adding actions always throws them to the end of the list, and you had to manually click them up the list one by one. I mentioned I'm lazy, so I didn't want to click it over 20 times! That's why I added dragging. Just grab the name of the action, and drag it to where you want it. 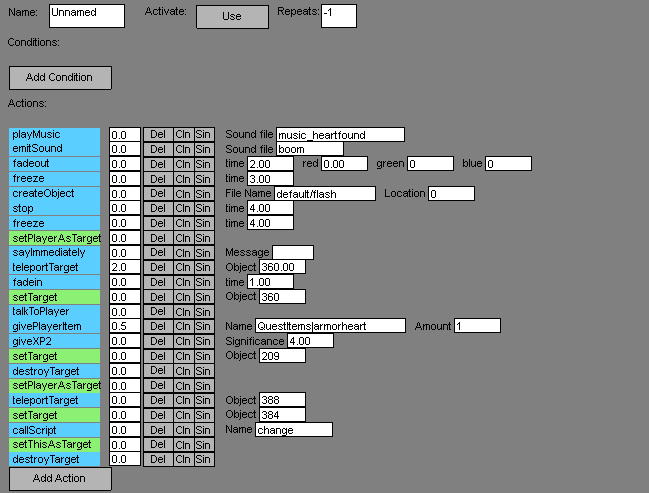