I was going to release a new version of Driftmoon, but I'm afraid my dev computer just saw it's last moments. While we wait, here's a new part in the series of me replaying some of my older games.

We're on to part 4, Bikez II. This game is from the year 2001, and it uses the same engine as my previous game The Forge. I think I did the whole game in about 5 months. From the screenshots you would say that it's a GTA 3 clone, but of course Bikez came out a bit before that. It reminds me mostly of Carmageddon, but I hadn't heard of it when I made Bikez II.

Bikez II is also my most downloaded game. Recently it's been picked up in China. I guess the success is due to the fact that it runs on pretty much any old computer, and it looks like a decent action game in screenshots.

My first reaction to starting the game is to turn off the music, it feels pretty out of place. The controls are non-intuitive, you have to press 1,2,3 and 4 to activate your weapons. But driving the motorcycle feels pretty good and fast, especially if your target is farther away.

The game is entirely mission based. You get a mission by finding a fella who looks like you, apparently it's your gang outfit, and by pressing enter while stopped near him. Usually you end up killing him, because if you drive near a citizen he'll be chopped to pieces.

For some reason the entire police force of the city is after you, so if you stop at any time, you're likely to get hit by a homing missile. 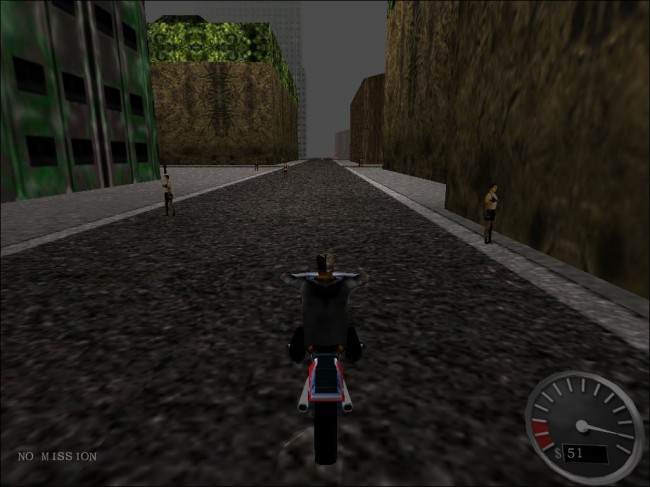 I disliked the missions that involved killing other motorcycles - they're nearly impossible to hit. The best missions were the ones where you had to drive to a location quickly. Maybe it should actually be a messenger game or a racing game. At least to me the combat mechanics were the worst part.

You can upgrade your weapons, but I ended up wasting all of my money fixing the motorcycle after each mission. The homing bullets system reminds me of Judge Dredd comics from my youth.

I think with a little graphics update, and focusing on the racing part of the game it could actually be pretty good for a few minutes play.

If you're feeling adventurous, head on to the Bikez II download page and tell me what you thought of it. It's only 3 MB, and pretty quick to start, so it should be easy to check out.