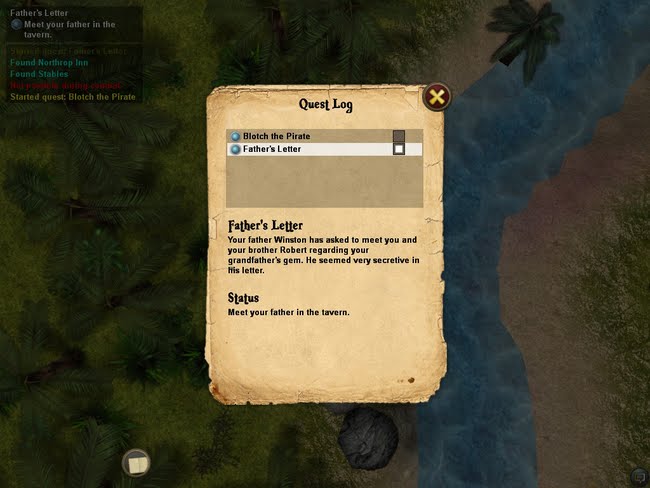 A common problem with any roleplaying game is forgetting what you should be doing. I bet it's happened to a lot of new Driftmoon players. But now you can leave your worries behind: Behold, our brand new Quest Log!

It's quite simply a way of showing you the currently open quests, and the tasks you need to do to complete them. You can mark a single quest as active, and the game can show you the current status of that quest. In addition to just acting as a reminder of what you should be doing, the quest log seems to be very useful in spotting new quests. Previously you had no way of knowing whether something interesting you found was part of a quest, but now you see a message that a new quest has been started.

From a modders standpoint the new system is very easy to use. The quest description and the status messages are all written to a single file. There are three script commands to change the quest status: advance quest status, force quest status, and close quest.

Using the advance command means that the status cannot go backwards. It's useful when it's possible to complete part 1 of the quest after already completing part 2, in that case you wouldn't want the quest to go backwards to state 1. The force quest status command has no such restriction. I literally spent half an hour to script in all of the current quests, so it should be very simple to use.

And yes, this handy new questlog was the most requested new feature I had you guessing at previously.