It's that time of the year again, I'm going to have a look at one of my old games. Previously in this series:

First a word on naming games. Wazzal was originally called Stars. I even had a great big logo for it, I campaign for it, spend a lot of time making the name. So, along comes a group saying they released a game called Stars! almost five years ago, change the name or we'll sue. Alright, I say no problem, it was impossible to find on search engines anyway, no wonder I didn't notice your existing game. So I changed it to Stars Supernova. That's a lot of work, you have to track down every version of the game from small download sites and get them to replace it. And change the names in reviews as well. Ask a lot of favours.

The next month the same group of developers comes and says they're making a game called Stars! Supernova Genesis. So rename your game or we'll sue. Being a small indie dev, I didn't want to pick a fight with big guys, so I changed it again. This time I made up a script that thought up names and searched the new hot search engine Google for them. It then listed me all the names that weren't found on the search engine. So in the end Wazzal was just a random name that nobody had used yet. And it wasn't a bad one. Sadly the developers of Stars! Supernova Genesis ran out of money before they could release their game, so the naming conflict wouldn't have hurt anyone. 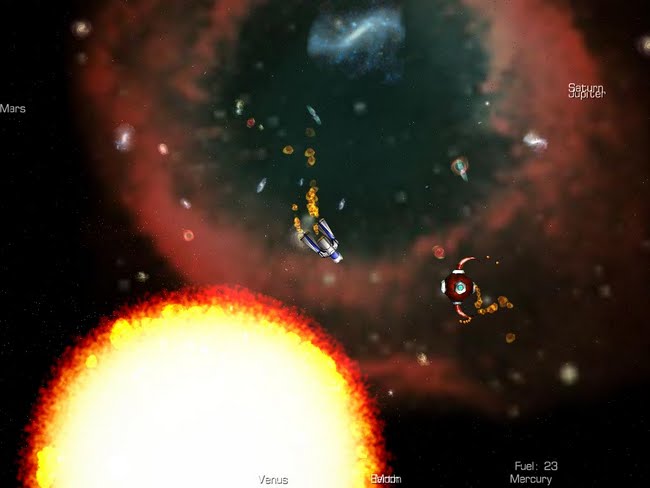 And now onto the game. Looks like I had a different logo back then. It must have changed for every game I made. It seems to crash at keyboard selection, best to use the factory defaults then!

The intro. Got to love it, I named the space organization the Federation. What an original idea! Luckily it's only ever mentioned in the intro. The game seems to start just after a bunch of aliens have come to Earth claiming that the Sun would go supernova. The intro tells you that you've captured a ship, and become interplanetary pirates. In retrospect it might have been more interesting to start the game just as the aliens come, and you capture the ship. You know, play it instead of reading it. The plot seems to be that you have to plunder and loot enough money to pay the aliens for a ticket out of the supernova.

And then saving the game crashes it. Oh well, it only takes an hour to play the game through, so why save...

The game starts with your first mate Dusky Joe telling you a bit on what to do. And then he tells you the keyboard controls. A bit of an immersion breaker there, but then again Wazzal is more on the action/arcade side, so I guess it doesn't count.

There are three game modes, traveling in space, combat, and boarding a ship. Traveling mode uses your fuel whenever you use the thrusters, and you're bound to run out at some point. Apparently every new player finds themselves out of fuel very soon, and then only the sturdiest of players continue. Playtesting would have found that out, but who playtested indie games back then? Not me at least. In traveling mode your ship follows the gravitational pulls of planets, so theoretically you could travel through the solar system with very little fuel expended, just like real spacecraft do. But it didn't fit in an otherwise very arcade game. I should just have left fuel out of the game.

My favourite is the combat mode. Every ship has two weapons, and it runs pretty similar to my all time favourite Star Control II. The background for the combat depends on where you are when combat starts, there could be a planet, or hundreds of asteroids. You can also shoot the asteroids, and they become smaller chunks! Also, you can own many ships by capturing enemies. You control one ship, and the others are controlled by the computer. There's also a bit of strategy, you can choose to capture a ship, or to blow it in bits. But to capture it, you must not blow it up. The more damaged it is, the more you have to pay up later to fix it. That bit comes from Sid Meier's Pirates, another favourite of mine. Actually I still liked combat in both games more than the combat in Wazzal, I should have taken more pointers from there.

The ship capturing mode is a predecessor to Notrium. It was easily the weakest link of Wazzal, you just ran around and shot walking enemies on a single screen. A later version of me would have left it out, but I'm glad I didn't leave it out at the time, as it later evolved into a pretty good game on it's own.

There's also a plot for you to follow, it's a string of missions mostly involving combat. I won't get into that, as it would spoil the plot. But I will point out my favourite feature of the game, you can actually loot whole planets! Go on, go to Earth and attack! I know you've always wanted to try it...

Graphically Wazzal is very nice, even compared to today's indie games. I'm especially proud of the planet models and their shadows. Space games are easy to make pretty, just add a few photos of nebulae on a black background, sprinkle with shiny ships, and you have cheap and pretty graphics. People don't expect space to look interesting, so you can get away with less. And this is the last game to feature my own music. I think the music fits the game well, but lacks the kind of professionalism that for example the music in Driftmoon has in abundance.

After all it's shortcomings I still like Wazzal. It's a neat little package and doesn't pull any tricks. If the combat mode were enhanced, the fuel usage left out, game saving fixed, and maybe the ship capturing left out, it could be a decent game. That brings up a question. Is anybody interested in the source codes for Wazzal? It's still mostly in Finnish, but it sucks less than the sources for Bikez II did...

Wazzal took the least time to make of all my games. All in all, it took little over three months to finish. With Driftmoon being finished this year after 6.5 years, Driftmoon will take about 25 times longer to finish. But I'm quite certain it will be 25 times better as well!