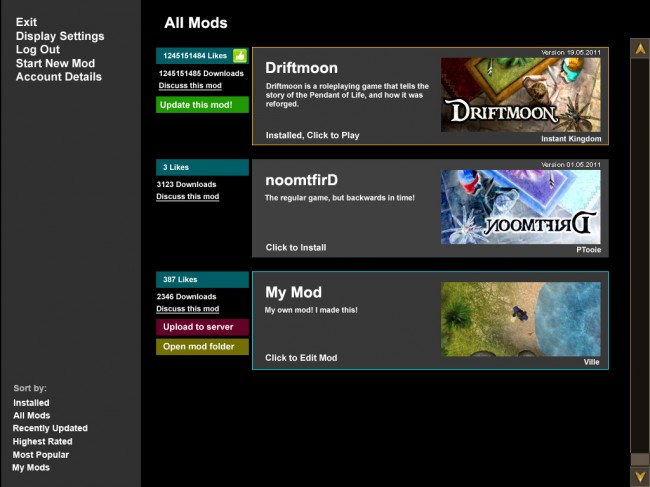 We are proud to present the Grand Mod Plan. The above is a mockup of what The Mod Screen will look like.

As some of you know, Driftmoon comes with the full editor tools used to create the game, and they can be used to make Driftmoon mods. Total conversions, plain old improvement mods, the grand adventure from that fantastic game plan you've been designing for years - whatever your fancy! Our plan has all along been to make One Mod Screen to rule them all, One Mod Screen to find them, One Mod Screen to bring them all and in the darkness install them.

Got carried away for a second there. The One Mod Screen, as it shall henceforth be called, will be the first thing you see when you start Driftmoon. You will be able to see all the mods ever created (for Driftmoon, obviously). Just click to install and play. And for modders, it's just click and upload. The first mod in the mockup would be a mod I've installed already, the second is one that I've yet to install, and the last shows how a mod under construction would look like. There might also be a way to sell the mods you're making through Driftmoon, so you might want to think about that if you're putting a lot of hard work into your mod.

Now I'm asking you for help! Tell us how the One Mod Screen really ought to be. There are about a hundred things left to decide. For example, to prevent people from overwriting mods on the server, we probably need a way to identify the mod maker. That means registering as a modder, and the mods you make would be tied to your modding profile, so you could edit them from any computer, and not just that one borrowed computer you happened to start it on. I really hope to hear your ideas, whether you are a modder, or whether you just like playing mods.